This is my review of Mistletoe Christmas, which I spotlighted a few days ago on this blog.

Mistletoe Christmas is an anthology consisting of four stories, all set in England, 1815, and evolving around the Duke of Greystoke’s Annual Christmas Revelry, always the most sought after party invitation of the season. The stories are written by four different authors, Eloisa James, Christi Caldwell, Janna MacGregor, and Erica Ridley.

All four stories transport us to Regency England at Christmas time. There are some sex scenes, for those who wish to avoid them.

In A Mistletoe Kiss, by Eloisa James, the main character, Cressida, is the long-suffering victim of her abusive father, the Duke of Greystoke, who has used her for years to plan his famous Revelry. Cressida’s growth as a person and evolving ability to see her true self and gain some confidence was well done. The romance with Elias was a little over the top as he suddenly and instantly fell in love with her although he’d known her for years. It was a touch unbelievable, but overall it was a very nice romance. 4 stars.

Wishing Under The Mistletoe by Christi Caldwell brings a little of “A Christmas Carol” vibe. Isabelle and Cyrus’s relationship ended because he became completely wrapped up in the idea of amassing a fortune, supposedly for her. Ten years later, they meet again at the Revelry and sparks are still flying. This is the story of how an “Ebenezer Scrooge” type of character has a chance to get his lost love back. I found it a satisfying Christmas story. 5 stars.

Compromise Under the Mistletoe by Janna MacGregor is the story of a marriage torn apart. Caroline and Stephen are reunited at the Christmas Revelry. They are only together because they have to pretend to be a happy couple for the Duke so Caroline can gain access to her trust fund. I found this to be a bit much. The reason for reuniting was to get money, and the reason they broke up in the first place was because Caroline wasn’t getting enough attention. It all seemed simple and selfish, and not in any way based on a real marriage. 2.5 stars.

Mischief and Mistletoe by Erica Ridley is the well done story of Miss Louisa Harcourt, who is told by her mother that the Revelry is her last chance to find a husband. Determined to make her mother happy. Louisa entertains her less than ideal marriage candidates, although her real desire is to write and publish poetry. When she meets Ewan, a fellow poet, at the Revelry, she faces a choice between happiness and duty. I really enjoyed this one as it showcased a woman with interests and ambitions other than marriage. 5 stars.

Overall, this anthology earns four stars. It transports us to the Christmas season.

I received a free copy of this book from Avon Books via Netgalley. My review is voluntary.

Eloisa James, a New York Times and USA Today bestselling author, wrote her first novel after graduating from Harvard, but alas, it was rejected by every possible publisher. After she got an MPhil from Oxford, a PhD from Yale, and a job as a Shakespeare professor, she tried again, with much greater success. In 2013 she won a Rita Award for Best Romance Novella. She teaches Shakespeare in the English department at Fordham University in New York. She is the mother of two children and, in a particularly delicious irony for a romance writer, is married to a genuine Italian knight.

Janna MacGregor was born and raised in the bootheel of Missouri. She is the author of The Bad Luck Bride. She credits her darling mom for introducing her to the happily-ever-after world of romance novels. Janna writes stories where compelling and powerful heroines meet and fall in love with their equally matched heroes. She is the mother of triplets and lives in Kansas City with her very own dashing rogue, and two smug, but not surprisingly, perfect pugs. She loves to hear from readers.

Christi Caldwell is the USA Today bestselling author of more than ten series, including Lost Lords of London, Sinful Brides, The Wicked Wallflowers, and Heart of a Duke. She blames novelist Judith McNaught for luring her into the world of historical romance. When Christi was at the University of Connecticut, she began writing her own tales of love–ones where even the most perfect heroes and heroines had imperfections. She learned to enjoy torturing her couples before they earned their well-deserved happily ever after. Christi lives in Southern Connecticut, where she spends her time writing, chasing after her son, and taking care of her twin princesses-in-training. Fans who want to keep up with the latest news and information can sign up for her newsletter at www.ChristiCaldwell.com.

Erica Ridley is a New York Times and USA Today bestselling author of over thirty historical romance novels. Her popular series include the Dukes of War, Rogues to Riches, and Magic and Mayhem.

Hertfordshire, England, 1812. Margaret “Meg” Hall has missed her first London season due to serious illness, but now that she has recovered, she is back on the “marriage market.” Her mother decides to have a house party and invite three eligible men, one of whom is a viscount. Meg knows she is expected to marry well, and she intends to do so. However, her best friend, Nathan, has also been invited. Nathan has no desire to see Meg married off to someone else, but he is not the best prospect and has never declared his love for her. Will Meg choose love or duty?

This is a charming novella that transports us to a Regency-era house party with all its customs and propriety. The point of view shifts between Meg and Nathan as they struggle to deal with their feelings. In the midst of picnics, dances, and garden strolls, Nathan’s angst and Meg’s confusion are well portrayed. The plot is timeless, as two friends struggle between what they want to do and what society tells them they ought to do. This is a pleasant and endearing love story that Regency romance fans will enjoy.

I received a free copy of this book from the publishers via Historical Novels Review Magazine, the magazine of the Historical Novel Society. My review is voluntary and my opinions are my own.

Karen Thornell grew up reading when she should have been sleeping, but it wasn’t until 2019 that she started writing. Tired of ending books and saying ‘goodbye’ to beloved characters, she wondered what it would be like to have her own characters that lived in her head always. It was probably a mark of sleep deprivation that she wanted people living in her head, but the idea was planted regardless.

Karen lives in Utah with her husband and kids. When not writing contemporary or regency romance, she spends her free time doing endless loads of laundry, playing board games, and, yes, talking to those characters in her head.

*Not a book review

The Rake of Hearts by Emily Windsor

When the heart is afire…
By his own admission, Lord Ernest Brook is a rake. With sapphire gaze, sinfully handsome looks and a duke for a brother, the pleasures of London have come with ease…apart from one.
Ever since the gauntlet of her first wintry dismissal was thrown, the widowed Hebe Lock has stirred his deepest desires, but just what would it take to woo such a woman?

Sparks will fly.
Hebe Locke has vowed to never again fall for a scoundrel after her brief marriage to one left her broken and haunted.
Now she finds comfort with paintbrush and canvas, but as a female artist in a male world, commissions are as rare as a ballroom without rakes.

A castle of enchantment.
As the heat of late summer warms the land, an ancient, moated castle plays host to a widow and a rake, both concealing passions contrary to their reputations.
But as Lord Ernest awakens Hebe’s desire and thaws her frozen emotions, can she hold true to her vow?
Or can this rake win the one heart he yearns for?

A Lady to Suit Series

If you love historical romance, you can’t do without this wonderful book.” -Goodreads Reviewer

“This is a beautiful historical romance where our author paints a picture just as well with her words as our heroine with her sketches.” -Bookbub Reviewer 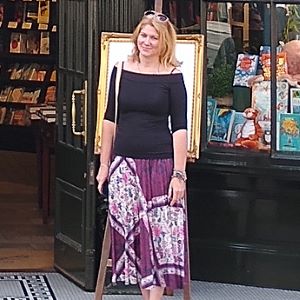 Emily Windsor grew up in the north of England on a diet of historical romance and strong tea.

Unfortunately, you couldn’t study Regency slang, so she did the next best thing and gained a degree in Classics and History instead. This ‘led’ to an eight-year stint in engineering.

Having left city life, she now lives in a dilapidated farmhouse where her days are spent writing, fixing the leaky roof, battling the endless vegetation and finding pictures of well-tied cravats.

Friday, August 27
Novels Alive
Bonnie Reads and Writes
What Is That Book About
Chicks, Rogues and Scandals

Saturday, August 28
Pursuing Stacie
Passages to the Past
Reading is My Remedy
Satisfaction for Insatiable Readers

Enter to win a $15 Amazon Gift Card & an eBook of The Rake of Hearts!

The giveaway is open to US residents only and ends on August 29th. You must be 18 or older to enter.

The Rake of Hearts

A Regency Christmas Anthology by Susan Payne is a collection of three Regency romances.

In A Regency Christmas Story, Penelope is struggling to pay her brother’s gambling debts to Lord Leighton. Will she offer up anything in order to pay?

In The Best Christmas Present, The Earl of Williamsburg is looking for a wife. But a debutante’s mother is catching his interest, and possibly his heart.

In Sugar Plum Christmas, Micheline works for a bakery which caters to the aristocracy when she catches the eye of Lord Hedley. Can he win her heart by discovering her past?

These Regency Christmas romances did not meet my expectations for Christmas stories. A Christmas story must transport you to the Christmas season, no matter what time of year it might be. Here I am right in the middle of the actual Christmas season and I found these stories to have only passing references to Christmas. The book cover is also very generic. It feels as if these were already existing stories that were thrown together at the last minute.

I also found the main male protagonists to be lacking character. They had no problem with taking mistresses on the side and their treatment of women was abhorrent. I found Sugar Plum Christmas to be the best of the three, but only because it describes the confections Micheline is baking so well. Sugar Plum Christmas also had the best Christmas atmosphere, although it was still not enough.

I received a free copy of this book from the publishers via Netgalley. My review is voluntary.

Link to the Book on Amazon

Link to my Goodreads Review